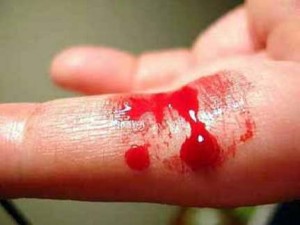 Abnormal bleeding is caused by anything that interferes with the blood clotting mechanism. Platelet deficiency and deficits of procoagulants can result from impaired liver function or genetic conditions.

Thrombocytopenia is a condition in which there is a deficient number of circulating platelets. This deficiency causes spontaneous bleeding from small blood vessels throughout the body. Additional movement causes widespread hemorrhage which can be identified by many small purplish spots called petechiae on the skin. Bone marrow malignancy, radiation exposure or certain drugs can cause thrombocytopenia. Concentrated platelet transfusions can provide temporary relief from bleeding.

Impaired liver function makes the liver unable to synthesize procoagulants. When this occurs, abnormal and severe bleeding usually occurs. Vitamin K deficiency is a common cause of this occurring in newborns and following the use of systemic antibiotics. Total liver impairment from hepatitis or cirrhosis is also common.

Symptoms of hemophilia begin early in life and are usually managed clinically by transfusions of plasma or injections of the appropriate clotting factor. These therapies can provide relief for several days but are expensive.

Hemophilia patients rely heavily on blood transfusions or factor injections. In the past, many hemophiliacs became infected with hepatitis and HIV because of poor blood testing measures. Today, infections are avoided as a result of new testing methods for HIV, hepatitis vaccines and genetically engineered clotting factors. If this blog interests you and you would like to learn more about allied health subjects like phlebotemy training, check out this related blog about blood transfusions.