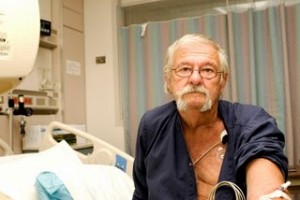 Circulatory shock is any condition that causes blood vessels to become inadequately filled so that blood cannot circulate normally. The result is that tissue cells become deprived of adequate blood flow and eventually, if the condition persists, cells can die and organ damage soon follows.

Hypovolemic shock is the most common form of circulatory shock. It usually results from a large amount of blood loss, which can occur with acute hemorrhaging, severe vomiting or diarrhea, or extensive burns. The heart rate will increase to correct a massive drop in blood volume. This drop in volume will result in a weak pulse that is usually the first sign of hypvolemic shock. The blood vessels will experience intense vasoconstriction in an attempt to improve blood pressure. Vasoconstrition causes blood to be rerouted from various blood reservoirs into the main circulatory channels. This rerouted blood helps to improve venous return and stabilize blood pressure. If blood loss continues the blood pressure will eventually decrease. The best way to manage hypovolemic shock is to replace the hemorrhaging blood fluid as quickly as possible.

Vascular shock is another form of circulatory shock that can occur when blood volume is normal. However, this type of shock is caused by an abnormal expansion of the vascular bed that is caused by extreme vasodilation. One of the signs of vascular shock is rapidly falling blood pressure, which is usually caused by a drop in peripheral resistance. Anaphylactic shock is a systemic allergic reaction that can commonly cause vasodilation due to a massive release of histamine. Two other common causes of vascular shock are failure of automonic nervous system regulation, known as nerugenic shock, and septicemia or septic shock, which is caused from systemic bacterial infection. Bacterial toxins have been found to commonly cause vasodilation and ultimately vascular shock.

Cardiogenic shock occurs when the heart fails and cannot sustain adequate circulation throughout the body. The most common cause of this type of shock is from myocardial damage.