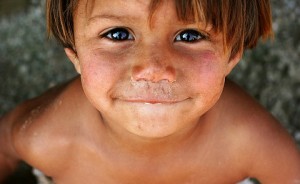 Approximately 1 per every 1000 live-born infants is born with a congenital heart disease.

Identifying it using plain film takes a tremendous amount of experience and will require the radiologist to use several important principles concerning congenital heart disease in children.

The first principle is that it can be difficult to determine the heart size of infants and children compared to adults. When looking for cardiomegaly in a child, the radiologist should be sure that she is not looking at the thymus and that the film has been taken on a good breath. Lateral views should be used extensively. If the radiologist notices that the heart is protruding significantly beyond the visible airway on the lateral view, then the heart is most likely enlarged. If the anteroposterior view appears large, but the lateral view appears normal, than the radiologist is likely viewing the thymus instead of the heart.

The second rule is that children can have normal sized hearts with serious heart problems. Having an enlarged heart is not the prerequisite for heart disease. It is just one of several possible signs and is not necessary. This is most common in conditions in which blood flow to the lungs is insufficient because of right-to-left shunting. Generally, children's hearts tend to dilate because of volume rather than pressure. Right-to-left shunting is commonly caused from condition like tetralogy of Fallow. This condition will not cause an enlarged heart because the volume of blood moving through the heart is diminished. A cyanotic neonate with a normal chest film usually has some variant of tetralogy of Fallot.