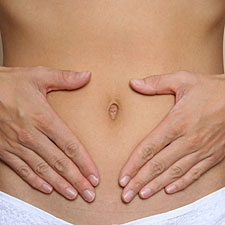 Gastrointestinal bleeding can be a serious problem. There are several common causes of gastrointestinal bleeding. This causes include peptic ulcers or varices with portal hypertension in the esophagus, stomach or duodenum; duplication, mesenteric vascular disease, or Meckel's diverticulum in the small bowel; or angiodysplasia, polyp, tumors, or colitis in the colon. With acute GI bleeding it is important to determine where the source of blood loss is coming from. Is it the upper or lower GI tract? About two thirds of patients with acute GI bleeding have upper GI bleeding. There are several clinical clues that are evident with gastrointestinal bleeding. Hematemesis can occur when there is acute bleeding from the upper GI tract, and hematochezia can occur when there is acute bleeding from the colon. Melena can occur from bleedin in either area but is more often due to upper GI bleeding.

Upper GI bleeding is often evaluated by endoscopy. This type of procedure allows for better localization and can also be used for treating the bleeding site as often as possible. Imaging studies are commonly used when there is a massive amount of bleeding. An angiography is often used diagnostically and can also be used therapeutically to help occlude sites of bleeding. Acute lower GI bleeding is often first evaluated with a proctosigmoidoscopy procedure, followed by an angiography, if needed.