What is a healthy diet?
Recent Blogs

What is a Healthy Diet?

AlliedHealthWorld.com has previously published an article about whether Americans were addicted to fast food. While fast food might not be addictive, there are studies and plenty of evidence that the prevalence of these restaurants is growing, as well as their advertising presence. With the expansion of these options it may not be the food that we are addicted to; it may be that we have built an addiction to the convenience of having someone else cook for us when we are too tired to do so for ourselves.

It may be time-consuming, and it may be hard work, but switching to a better diet can have beneficial effects on overall health. It may also help to curb the exponential growth of spending in the U.S. health care sector. A report by the Credit Suisse Research Institute, Sugar: Consumption at a Crossroads, stated that "30%-40% of healthcare expenditures in the USA go to help address issues that are closely tied to the excess consumption of sugar."

What is a healthy diet, though? It may be simple and easy to tell someone to just make better choices, but how do they go about doing that?

People of a certain age may remember the food pyramid from their health class, or possibly their children's health class. Released in 1992, it showed the various food groups and how many servings we should have throughout the day of each. For those who have never seen the pyramid, it looked like this: 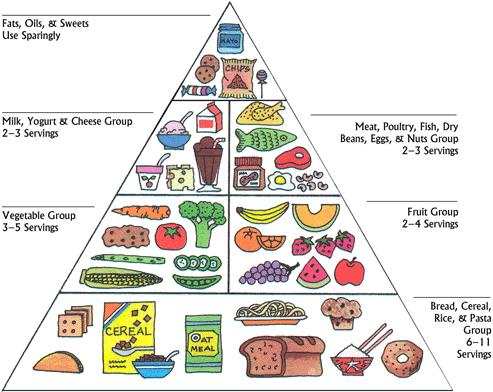 The food pyramid became ubiquitous, and was plastered in schools, on cereal boxes, and other packages of foodstuffs. Many doctors and nutritionists complained that this version of the pyramid was confusing, so a revised edition was created and released in 2005. It looked like this: 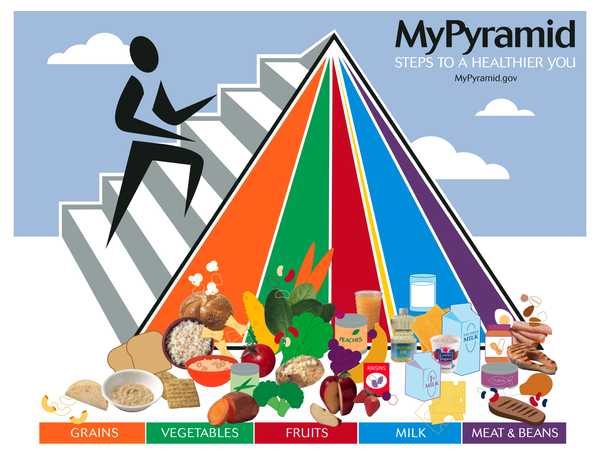 This new version was intended to be a little clearer and also promote exercise, with the figure running up the steps.

Both of these pyramids have now been replaced by the current incarnation, featuring the visual representation of a plate: 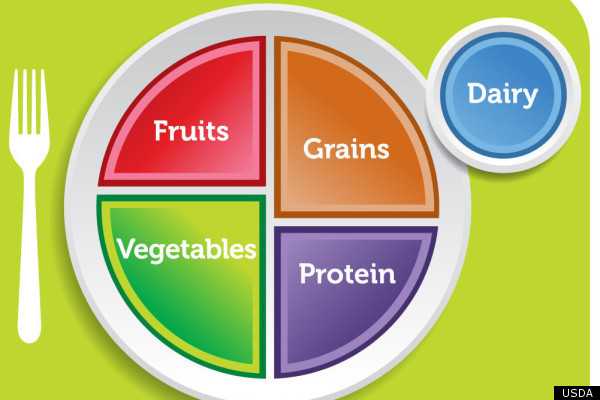 In an article written by William Neuman for The New York Times, Dr. David Kessler, a past commissioner of the U.S. Food and Drug Administration, said that few people actually ate the way that the pyramids suggested they should. According to Dr. Kessler, the plate representation "conveys the message [of how to eat appropriately] in a way that we all can understand," alleviating the confusion caused by the pyramid many of us became familiar with.

Even with the clarity some health professionals feel the plate brings, it still does little to explain what a healthy diet is.

What is a healthy diet?

In order to help figure out what constitutes a healthy diet, AlliedHealthWorld.com spoke to Dr. Liz Applegate, the director of sports nutrition at the University of California, Davis. According to Dr. Applegate, part of leading a healthy lifestyle involves having knowledge about what you are eating and how it can affect you. This is beginning to happen more than in the past.

"Consumers are a lot more knowledgeable than they were 20 years ago," Dr. Applegate said. "Who would've been talking about trans-fat 20 years ago except if you were an organic chemist? And now it's on a food label. [So] people know at least, 'I think I'm supposed to avoid those.' "

Even with all of this new knowledge about what is and is not healthy for us, we still manage to commit ourselves to a diet that is the antithesis to what nutritionists would have us eat.

"Most people need to have at least two-and-a-half cups to three cups of veggies every day," according to Dr. Applegate. "They need at least two to three pieces of fresh fruit. They need to eat whole grains, at least three or more servings a day."

Unfortunately, what we need and what we actually eat are sometimes two different things, Applegate said.

"If we just look at what should people be getting when they eat, [they] average less than two servings of fruits and vegetables a day when [we need] five to nine. So we're not even close in a lot of respects."

If we are "not even close," as Applegate pointed out, what is it we are consuming?

We don't consume the right amount of healthy foods we need in our daily diets. What we do consume, however, is a bunch of empty calories.

It is the consumption of sugar that should have us really worried. As we referred to in part one of this article series, type 2 diabetes costs the U.S. health care system an estimated $140 billion annually. The U.S. consumes more sugar than other countries, as shown in this graph by the Credit Suisse Research Institute: 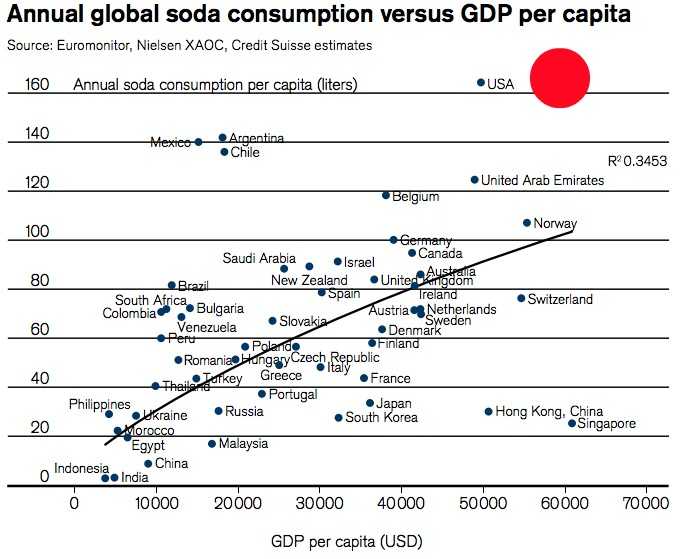 The average U.S. citizen drinks more than 160 liters of soda per year. That is a staggering amount. The Credit Suisse report also points out that the American Heart Association recommended that women have no more than six teaspoons of added sugar a day, and men should have no more than nine teaspoons. Unfortunately, a 12-ounce can of soda holds about eight teaspoons of sugar. Lowering our sugar consumption can help with creating a healthy diet, but what other steps can we take?

This brings us back to the new visualization method that the U.S. Department of Agriculture (USDA) has released: MyPlate. When asked in the interview about what diet people should follow in order to help lose weight and eat healthier, Dr. Applegate said that "in general I recommend that a person consume a diet that follows what we call a Mediterranean eating style or plan, which is actually what the USDA guidelines follow." The USDA guidelines Applegate spoke of is the MyPlate visualization.

"[It is] basically a Mediterranean eating style," Applegate said. "[You're] eating fruits and vegetables, you're emphasizing colorful ones, you're eating whole grains. … You're eating lean protein, including fish twice a week, you consume dairy or a calcium beverage equivalent, you consume yogurt."

It is not just about what you eat, though. It is about when you eat it, how much you eat, and how much exercise you get throughout the day. For people who think that skipping a meal in their day is a good way to combat overeating, it is not. Especially if the meal skipped is breakfast.

"Eating breakfast is a positive thing for weight control," Applegate said. "It actually helps you control your appetite if you eat breakfast, and you won't overcompensate later in the day."

It is this tendency to overcompensate that may lead many to continue to gain weight. It is not just about how much you consume. It is about the number of calories a person consumes in their day.

Exercise is also important to maintaining a healthy lifestyle. If we eat more calories than we burn off, we will continue to gain weight. How much exercise is needed?

"The recommendation for improving health is getting 30 minutes a day, most days of the week, of moderate exercise. So brisk walking, riding your bike, jogging, some really heavy type of yard work. And you can get it in 10-minute increments, if you don't have time for a 30-minute walk, you can do 10 minutes at break, walking briskly. You can also, after work, get in another 20 minutes with a neighbor or take your dog for a walk. If you exercise upwards of 60 minutes, what research shows is that's better for weight control. So you improve your health with 30 minutes, [and with] 60 minutes you burn more calories."

The only constant is change

It is not easy to change habits, and some people may not be able to afford to switch to a healthier diet. Even Dr. Applegate expressed empathy for people who earn less but still have to feed a family. They may have to make the choice to purchase unhealthy food because it is what they can afford. It may also be the only food available to them in the area that is convenient.

"You have more calories available to you [at a fast food restaurant]­ -- and frankly they taste good and it's what you're familiar with," she said. "It's a no brainer for an individual to say, 'I need to feed my family, and I'm going to go for the inexpensive calories.' "

How do we help low-income families create healthy diet plans that do not destroy their budget? Should losing weight become a matter of public health? Come back for the third and final part in our series on diet and health.