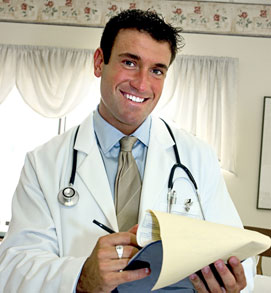 There are two ways a physician can be paid depending on their practice. A physician that is an employee of a healthcare facility may be paid a salary; other physicians with their own practices will likely be paid per procedure. In both cases, the medical insurer will reimburse each procedure performed at a fixed-fee rate.

Physicians set their own fees but negotiate lower fees with medical insurers. If you do not have medical insurance you will be obligated to pay the physican's regular fee. This amount could be several hundred dollars more than what the medical insurer pays for the same procedure. Physicians often deal with several different insurers. Each one has a different reimbursement allowance for the hundreds of commonly preformed procedures.

The insurer's fee schedule is based on negotiations with the healthcare providers. These negotiations take into consideration the fees that other physicians charge for the same procedures. These schedules become outdated with the introduction of new technology. This is because technology often helps physicians to accomplish the same procedure in a shorter amount of time. Up until recently, physicians were charging the same amount of money for a procedure that once took 3 hours but were reduced in time to 30 minutes with the aid of technological advances.

To be fair to the patients, medical insurers and physicians, Harvard economist William Hsiao was hired by the federal government to create a fair and standard way to pay physicians. After analyzing several thousand physician's practices he was able to devise a reimbursement system that considered the physician's time, mental and physical effort, technical skill, judgment and stress.

Hsiao developed the Resource-Based Relative Value Scale (RBRVS) for Medicare reimbursements. In this scale, medical procedures are ranked according to the relative cost to perform the procedure. After they are ranked, they are assigned three resource-based relative value units: for physician work, practice expense, and professional liability insurance. The allowed reimbursement fee is determined by multiplying the sum of the RBRVU's by a dollar conversion factor.