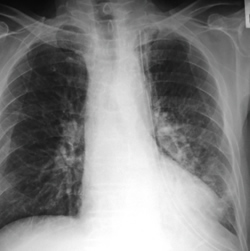 There are several diseases that can affect a person's ability to breath. Emphysema, chronic bronchitis and asthma are the three most common causes of chronic obstructive lung disease.

Emphysema is often caused from repeated exposure to noxious substances. Most emphysema cases are directly related to cigarette smoking. When the lungs are exposed to toxic substances, the walls of the alveoli are destroyed. This results in less surface area available for gas exchange. More and more surface area will be lost as the disease progresses.

The loss of surface area will eventually cause a person to become barrel chested and to breath through pursed lips in order to alter airway resistance. The body tries to make up for the lack of oxygen by increasing its red blood cell production. Patients with emphysema often end up with pink skin due to the increase in red blood cells. A lot of physical effort must be put into each breath and many calories are used. As a result, most emphysema patients are very thin. Eventually emphysema patients will require inhalers and possible a constant supply of oxygen.

Asthma is another common respiratory problem that affects the young and the old. Asthma causes the chronic inflammation of the airways and has a two-phase response. In phase 1, leakage of fluid from the capillaries causes bronchial constriction and a reduction of expiratory airflow. Usually this phase will resolve itself in 1 to 2 hours. A bronchodilator can be used to break this phase sooner.

Phase 2 occurs within 6 to 8 hours after the initial onset. Edema and swelling result causing a decrease in expiratory airflow. Only anti-inflammatory medications are useful during this phase.