Obesity as a Matter of Public Health
Recent Blogs

Obesity as a Matter of Public Health

AlliedHealthWorld.com has previously written about whether fast food is addictive and what should constitute a healthy diet. While fast food may not be addictive, it has become easier to stop at one of these establishments and buy something to eat rather than going to the grocery store. Not only is it more convenient, but as bad as the food may be for us to consume, it does taste pretty good. Another problem with eating healthy foods is not only having to stop at the grocery store, but having to shell out more money in order to purchase the necessary components for a healthy meal. Fast food is a simpler, cheaper option for the calories that we need to sustain ourselves.

Something might need to be done, however, as the amount of calories that we consume continues to grow while our lifestyles become more sedentary. This graph from a report by the Credit Suisse Research Institute entitled Sugar: Consumption At A Crossroads, shows how Americans have been consuming a larger number of calories since the 1980s: 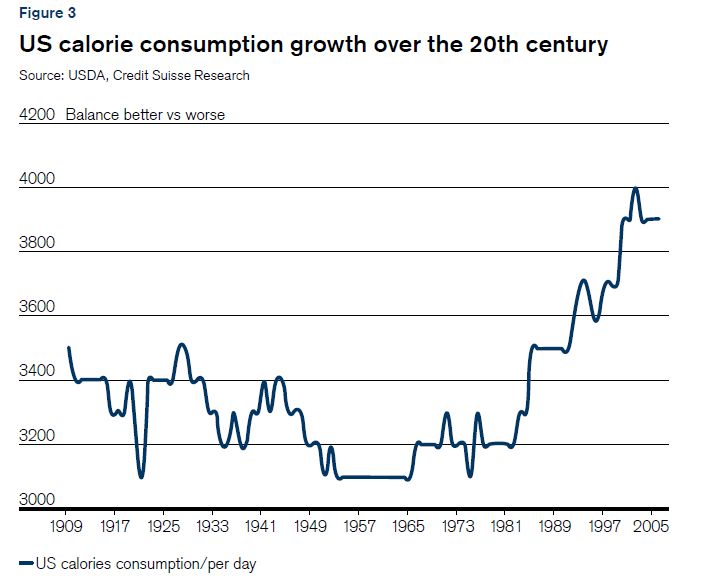 As our bellies get bigger the number of debilitating diseases that we suffer from grows as well. Obesity, heart disease, high blood pressure and diabetes are just a few of the known maladies that Americans are afflicted with as a result of the way our diets have changed over the years. What can be done about this? First we have to define what obesity is.

To put it simply, being obese means that a person is carrying around too much fat on their body. This can occur for a number of different reasons, such as eating more calories than you burn off in a day, physical inactivity, genetics, and consuming foods that are high in fat. As stated earlier, obesity can lead to a number of different diseases, including:

While it may be easy for some to look at themselves and know that they are obese, others may figure that they are just a bit overweight. In order to tell the difference, you might need to understand what your body mass index (BMI) is.

In an interview with AlliedHealthWorld.com, Liz Applegate, the director of sports nutrition at the University of California, Davis, it's the "ratio of a person's weight, measured in kilograms, divided by their height, measured in meters [squared]." Huh? Yeah, that is a bit more complicated than some might have thought, but essentially BMI measures the amount of body fat that a person has. It can have certain limitations, as a well-trained athlete may have a lot more muscle mass than a normal human being, which may result in a high BMI.

Even Applegate understood the equation was very complex.

"Already you've overwhelmed 99 percent of consumers with [this complicated equation]. So, instead, you go to the internet and you put in the words 'BMI calculator' and you simply put in your height in [feet and inches], which most people know, and you put in your weight in pounds."

After finding out your BMI, you can then consult a chart that will tell you where you stand. Below are the designations and the BMIs that are associated with them:

According to the Centers for Disease Control (CDC), about 35 percent of Americans would fall into the obese category. Some states fare better than others, but weight is a big issue in this country. Even though people may know they should eat better, our caloric intake is only growing. Is it time for some form of government regulation of sugar and fast food? Should our weight be a matter of public health?

The CDC produced an infographic that illustrates how the portion sizes we receive at restaurants have gotten bigger since 1950: 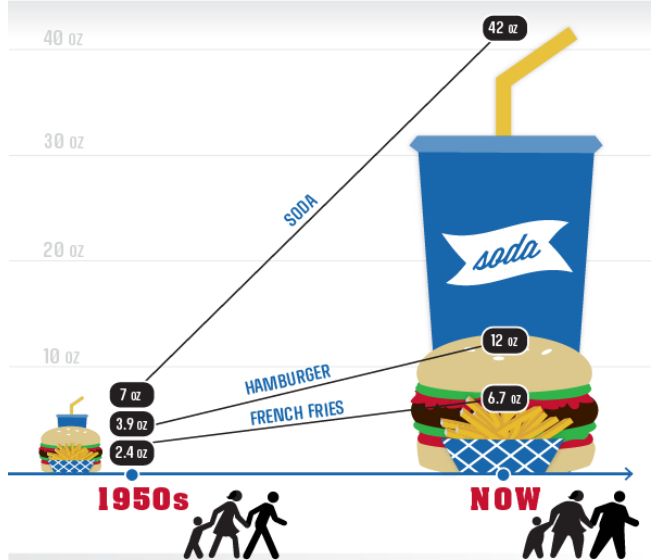 Portion size has become, on average, four times larger and adults have gained an extra 26 pounds on average since 1950. That is a lot of calories to consume in a single meal, unless you plan on working out a lot after you eat it. It also means a lot of sugar is consumed as well, as the average size of a soda included with these meals went from seven ounces to 42 ounces. This excess sugar consumption is not healthy, as the American Heart Association (AHA) has said that men should not have more than six teaspoons of added sugar a day, while women should refrain from having more than six added teaspoons of sugar. A 12-ounce can of soda already holds eight teaspoons of sugar.

According to the Credit Suisse Research Institute report sugar consumption has grown 46 percent worldwide over the last 30 years, and the average person consumes 17 teaspoons a day (70 ounces). It is even more frequent in America, as the average person takes in 40 teaspoons per day. That is well over the recommended number provided by the AHA, and efforts may need to be made to help curb the amount of sugar we feed ourselves daily.

Some efforts already exist in a number of states. According to the Credit Suisse Research Institute report 33 states have enacted a tax on sodas, or have legislation that removes the tax-exempt status from these beverages. California is trying to create a penny-per-ounce tax on soft drinks. Former New York Mayor Michael Bloomberg tried to limit the size of sugary beverages to 16 ounces, and it would only have applied to those drinks that have more than 25 calories per eight ounces. Thirty-four percent of the city's adults are overweight, according to the New York Department of Health and Mental Hygiene, and 22 percent are obese. Residents did not embrace the ban, as 53 percent felt that mayor Bloomberg went too far with his proposal.

In an interview with CBS This Morning, Rick Berman, the executive director of the Center for Consumer Freedom, said, "I think people understand that, if they have more to eat than they need, that they're probably going to gain weight. What you're really looking at here is an attempt to do away with personal responsibility."

Many people feel that politicians overstep their bounds when trying to create legislation that regulates what they can and cannot put into their bodies, especially if a majority of people enjoy the object of the potential regulation.

Dr. Applegate echoed the sentiments of Berman, saying, "when you have someone like the Mayor of New York stepping in and telling you what size your drink can be, your soda, that I think is nanny type of control."

If instituting this type of regulation has the potential to create a "nanny type of control," what should we be doing instead? Applegate shared her answer.

"When you offer lower-income individuals, specifically targeting those individuals that need more education" you might get a better result because you are empowering individuals. In addition, Applegate said that we need to "change some of what the dollars of WIC and food stamps can be spent on." It is this type of approach that Applegate prefers, one that spreads education, power, and options to those who need it, not one that removes choice. This form of empowerment "probably costs a lot more money, but it's what we need to better educate people."

In addition to providing the options for adults to make informed choices, Applegate said we also need to focus our efforts on young adults and children.

Many doctors concur with the idea of reducing sugar consumption as a matter of public policy: 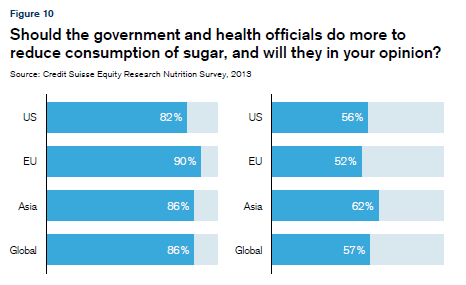 How they do so is up for debate. They can hope that politicians do the heavy lifting and create legislation that limits the amount of added sugar in food and drink, or we can all help each other by providing the educational foundation to make informed choices. As Dr. Applegate said, it might cost more to educate them, but it could also provide a more lasting result.

What is a Healthy Diet?