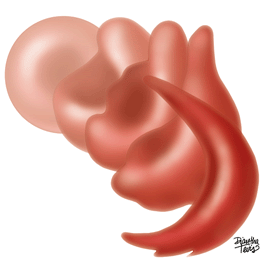 Sickle cell anemia first appeared in the west tropics and central Africa. It is a human genetic disease that causes the body to produce mutant hemoglobin known as sickled cell hemoglobin (Hb S). The cells are called "sickled" because this condition causes the red blood cells to have a sickled appearance. The problem with sickled cells is that their shape makes it difficult for them to pass through the small capillaries of the circulatory system. This difficulty hinders circulation and causes damage to many organs. The kidneys and bones are especially susceptible to problems. This disease can lead to death at an early age. About .4% of African Americans in the United States are afflicted with sickle cell anemia.

The sickled cell is an inherited gene that is passed from by both parents. A person who inherits both abnormal genes will produce 90-100% of a defective gene. Individuals who inherit one normal gene and one defective gene produce both normal and altered genes. About 10% of African Americans carry a single copy of a defective gene. This condition is called having a sickle cell trait. In these cases, they have a good chance of not being severely affected by the disease. However, there is a 50% chance of passing the gene to their children.