The Rise of Vaccine-preventable Diseases

Each year American babies get more than 10 million vaccinations, usually between 2 and 6 months of age. To get an idea of the impact of vaccines, consider this: diseases are prevented and lives are saved not only in individuals who receive the vaccines, but also in more vulnerable members of the population who can’t be vaccinated. This is called “herd immunity,” or community immunity, which benefits all of us. Vaccines are estimated to prevent 14 million infections and save 33,000 lives annually!

According to the Centers for Disease Control and Prevention (CDC), the following immunizations should be given early in life: 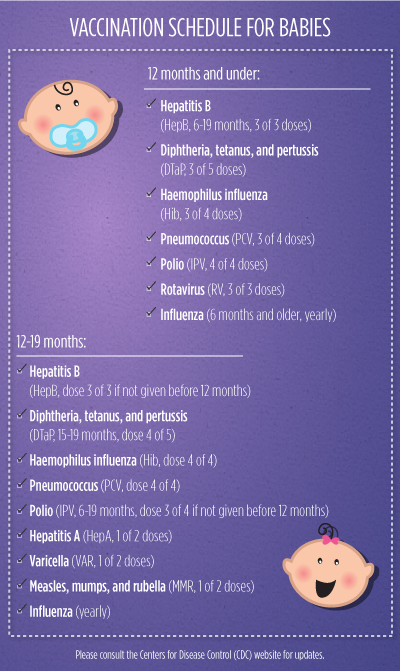 According to the CDC, since the development of vaccines, three diseases have been virtually eradicated:  diphtheria, polio and smallpox.  As of 2011, the incidence of five additional diseases has dropped by 98% or more, including: h. influenza (invasive in children less than 5 years old), measles, mumps, rubella, and congenital rubella syndrome. The CDC also reports that vaccination rates in 2012 for some diseases including such as MMR, polio, hepatitis B, and chicken pox are at or above 90% in children from 19 to 35 months of age. This means that millions of American parents recognize the value of having their children immunized.

While it is encouraging that millions of Americans – children and adults – are getting vaccinated each year, more needs to be done to encourage regular vaccinations. In 2013, Dr. William Schaffner of the National Foundation for Infectious Disease (NFID) reported that more than 50,000 adults die each year of vaccine-preventable diseases – more than the number of annual deaths due to car accidents, breast cancer or HIV/AIDS. Education is one potential solution to encourage vaccinations, especially about newer vaccinations like Gardisil which helps protect against four types of the HPV virus. WebMD reports that only 10% of American women from ages 19 to 26 have received this vaccination and only 6% of them have gotten all three shots in the series.

Organizations such as the NFID are working with national experts and health organizations to educate the public on the importance of not only childhood vaccination, but adult vaccines as well.  These immunization campaigns list the vaccines against 14 deadly diseases available to adults and highlight some of the potential risks and consequences from not being vaccinated, such as chronic illness and permanent disabilities, as well as the transmission of deadly infectious diseases to more vulnerable populations.

The lack of vaccines worldwide is also a concern. The World Health Organization estimates that there were one million measles-related deaths among persons in developing countries in 1999. It’s a rapidly spreading disease among an un-vaccinated populations, which can leave children blind, deaf and brain damaged, and it kills approximately 450 people worldwide every day. This is a disease that can be prevented through vaccination! It is estimated that if vaccinations were completely stopped, 2.7 million measles deaths worldwide could be expected each year.

Vaccines have long been a controversial topic in this country and other developed nations, often keeping parents from immunizing themselves and their children in a consistent and timely manner.  Misconceptions that vaccines have many harmful side effects, illnesses, and can even cause death persist in the media and minds of many concerned parents.  The CDC maintains that vaccines are actually very safe – adverse events are minor and temporary and most often consist of a sore arm or mild fever.  As for a link between vaccines and deaths, the CDC reports that so few deaths can plausibly be attributed to vaccines that it cannot assess the risk statistically.  Furthermore, all deaths reported to VAERS (Vaccine Adverse Event Reporting System) are thoroughly examined to ensure that causes aren’t vaccine-related.

Some health experts believe the dip in immunizations was caused by fraudulent research published in 1998 by Dr. Andrew Wakefield, a doctor who falsely “discovered” a causal link between the measles, mumps and rubella (MMR) vaccine and autism. After the research was released, but before it was found to be bogus, celebrity Jenny McCarthy publically discouraged parents from having their children immunized. One possible effect was found in a 2012 study of 98,000 children in Portland, Oregon. It showed that between 2006 and 2009, there was a four-fold increase of parents who either delayed or skipped their children’s vaccinations, putting their kids at risk.

While there is a miniscule risk to anyone receiving a vaccination, the CDC says the benefits to individuals and to society as a whole far outweigh the risks. If we have the ability to prevent 50,000 adults deaths in America annually, why wouldn’t we?

How to Get Involved

With so much at stake for individual and societal health, it is critical that immunization data is closely tracked. The vital information needed includes:  who is getting immunized, and at what age, as well as which immunizations are given, and any reactions to the immunizations also need to be tracked that may occur.  While employment and earnings depend on many factors, including coursework completed, geographic location and career options, three vital positions for the vaccination campaign and the efforts for maintaining accurate and complete data include:  Medical Records and Health Information Technicians, Licensed Practical Nurses (LPN), and Registered Nurses (RN).

Childhood diseases continue to plague countries all over the world. A vast majority of medical professionals agree that fears of vaccination are misguided and it’s important to keep up on immunizations for the betterment of our collective health.

·         “Impact of Vaccines in the 20th &21st Centuries,” Centers for Disease Control and Prevention,” January 2011, cdc.gov/vaccines/pubs/pinkbook/downloads/appendices/G/impact-of-vaccines.pdf

When you copy and paste this infographic on to your site, you agree to include the byline ('Courtesy of Allied Health World'), or provide credit in some comparable fashion. We'd ask that you preserve the included links back to AlliedHealthWorld.com, but this is optional.